The Goblin Formula is a biogenic chemical compound made to augment the human body. 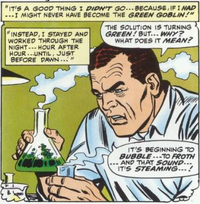 After Norman Osborn had his business partner, Mendel Stromm, arrested for embezzlement he found in his notes a formula which could apparently augment a person’s body to superhuman levels. Norman began research on the formula, hoping to eventually sell it. Unknown to him his son had tampered with it to spite him. Consequentially the completed formula was unstable and exploded in Norman's face. He spent the next week in the hospital recovering. After finally regaining consciousness he found his mental and physical functions have been greatly enhanced. It was later learned that exposure also causes severe insanity which was the primary motivation for Norman taking the identity of the Green Goblin.

Retrieved from "https://spiderman.fandom.com/wiki/Goblin_Formula?oldid=77293"
Community content is available under CC-BY-SA unless otherwise noted.