Jacob Kurtzberg (August 28, 1917 – February 6, 1994), better known by his pen name "Jack Kirby", was an American comic book artist, writer and editor regarded by historians and fans as one of the major innovators and most influential creators in the comic book medium. Ironically, of all the Marvel characters he designed and help conceive with Stan Lee, the company's flagship character Spider-Man was not one of them.

At one point Kirby started to claim he created Spider-man. Referring back to when Lee had gone to him with the idea of doing a spider-themed character, but Kirby's treatment was very different. Some historians have pointed out that this may have established that the character lived with an elderly couple, but this would be the extent of the influence over the final creation. Kirby's original Spider-man art has never publicly surfaced. In 1990 Ditko published a visual diagram to defend his design credit of Spider-Man in the History of the Comics book. 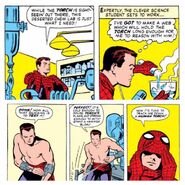 Strange Tales Annual penciled by Kirby, inked by Ditko
Add a photo to this gallery

Retrieved from "https://spiderman.fandom.com/wiki/Jack_Kirby?oldid=93876"
Community content is available under CC-BY-SA unless otherwise noted.